The CAT INV2000 Portable Generator: a Powerful Machine without Peers

The new machine would not disappoint. According to some of the latest portable generator reviews based on the big announcement, The CAT INV2000 came with some great consumer usability features. Among these is an easy-to-start switch, professional performance features with enhanced safety, and versatile functionality. It also came with a parallel kit which makes it possible for users to connect twin generators of the INV2000 family. This would give users double power output. 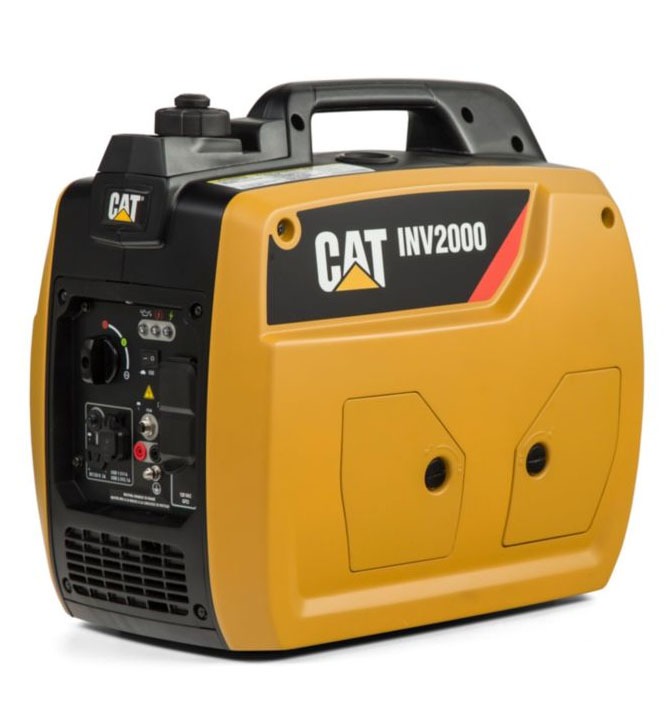 The generator fraternity grew wild with excitement at this news. The new generator model, which had been named the CAT INV2000, was guaranteed to offer professional-grade performance. Moreover, this would be packaged in the latest consumer model. With the introduction of the CAT INV2000 generator model, Caterpillar was venturing into what was described as a first in its checkered history of generator production that spans decades.

The CAT INV2000 generator has the following good features that are a favorite of many consumers who have used it:

The CAT equipment is generally associated with heavy-duty machinery like those found on large construction sites. The company has, however, recently entered the domestic user market. This has enabled it to produce less expensive generators that are designed for a variety of uses not limited to industrial machines.

It is true that the CAT INV2000 is more expensive than the Wen 56200i for example.  The price difference is, nevertheless, not big. The question is: Since the CAT INV2000 generator is more costly, is it any better than the Wen? There is no way to be sure. The CAT INV2000 has not been here long enough to give us the chance to compare fairly. Based on its brand’s history, however, we can expect this new generator to be a tough and reliable machine in the long run. 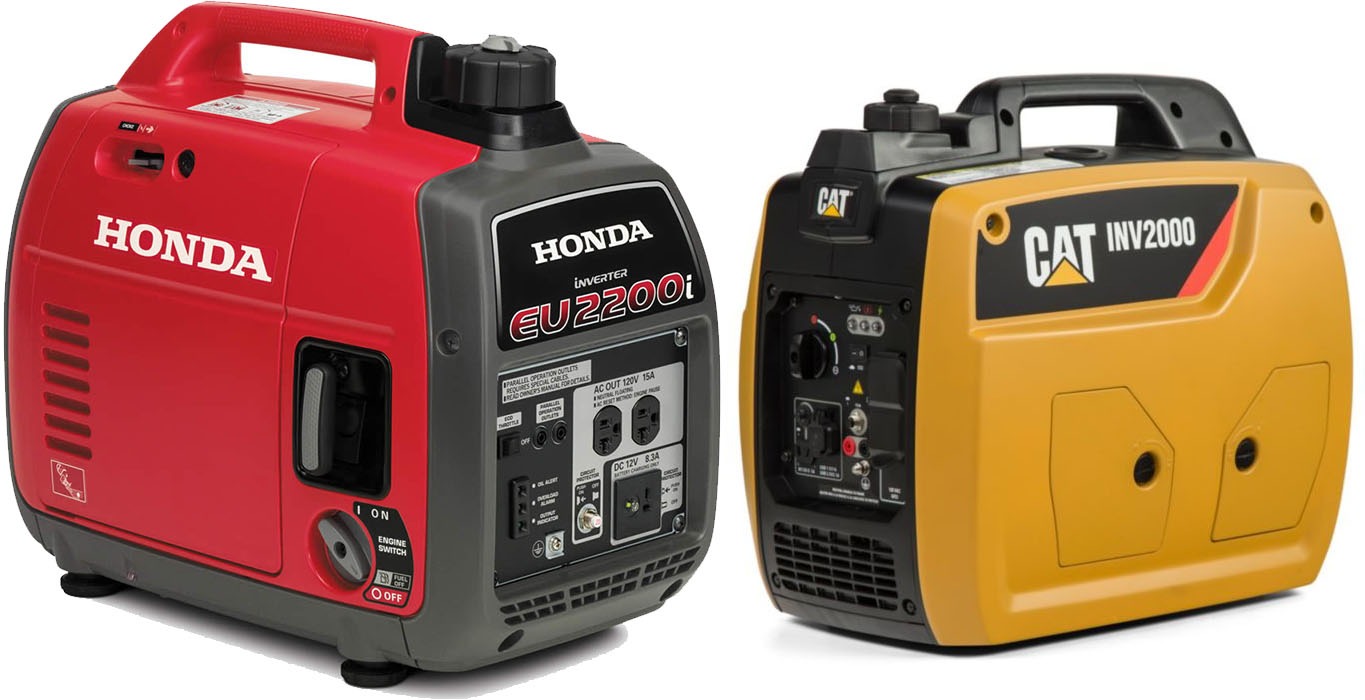 Honda and Caterpillar brands are among the top models in the world generator market today. They are reputable well-known brands that command high respect. They boast of decades of service that have proved their worth. Many customers are so loyal to these popular brands that they would rather go home empty-handed than purchase any other brand of generator for domestic and other uses! For these ones, It is either they get their favorite Honda or Caterpillar product or nothing.

How, then, does the CAT INV2000 generator compare with the Honda EU2200i, for instance? The Honda 2000 Generator is a much-loved portable inverter generator that carries many useful features. For example, the Honda EU2200i generator has a single control gadget and a recoil cable that allows the generator to be started by anyone regardless of his experience using these machines. 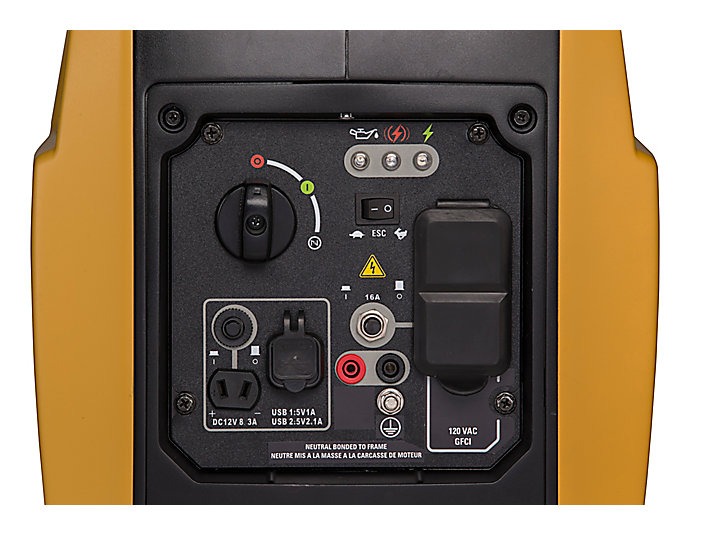 Like the CAT INV2000 generator, the Honda EU2200i also has a parallel connection feature. This feature allows you to pair it with another Honda EU2200i and get double wattage of power for running multiple smaller appliances or larger appliances.

The Honda EU2200i has yet another attractive feature compared with the CAT INV2000  generator. The Eco-Throttle toggle switch that is fitted on this generator enables you to switch over to fuel efficiency mode. This works very well for overnight or other extended applications.

Regardless, one of the most attractive features for any generator are lower noise levels. Many manufacturers have taken this factor into consideration. The result is the production of better quieter generators. In this respect, you will not have a problem with the Honda EU 2000i generator.

The Honda EU2000i is among the quietest generators among these category of machines of the 2000w. How does the Honda EU2000i compare with the CAT INV2000 in this field? In terms of noise levels, the CAT INV2000 generator is admittedly louder than the Honda eu2000i. We can actually refer to the Honda EU 2000i as a whisper- quiet machine that cannot disturb the neighborhood as it runs your home. Also, in terms of size, the INV2000 generator is a little larger than the EU2000i whose size is more modest.

Notably, some consumers recently reported that the CAT INV2000 generator does not command 2000 watt capacity and that it offers less power than the manufacturer claims. They went on to say that this generator cannot run the larger powerful tools because of its lower energy capacity.

In actual sense, the CAT INV2000 generator commands about 1800 running watts and 2250 starting watts. Because of such factors, we have included the power calculator feature on our website to help you determine the power capacity of any machine. This calculator will also help you check your power needs and assist you understand how much power you actually need

The control panels are also very similar. The CAT INV2000 offers circuit breaker protection in addition to two GFCI 120V household.  Both of these have plastic covers for protection from moisture and dust. The Honda EU2200i generator, on its part, doesn’t have this.

The CAT INV2000 generator also comes with two USB outlets and a 12v battery charging outlet. The generator has similar LED indicator lights as the EU2200i. The single control knob functions on these machines serve for run, stop and choke. They are almost identical.

The CAT INV2000 and The Honda EU2200i are strikingly similar machines. The Ford generator, in comparison has a higher running wattage. This is its biggest advantage. Overall, in this portable generator review, the CAT INV2000 would be declared the winner, when considering low fuel consumption factors.

For a fact, the CAT INV2000 is a good inverter generator that costs less than the Honda EU2200i and several similar machines of its kind. There is some justification for this. The 3 year warranty offered on the INV2000 is a bit better. Indeed, this might be an indication that its quality is slightly better.

The CAT INV2000 generator engine is almost the same size as that of the 79.7cc Ford FG2200is. The CAT generator’s engine is an OHV engine that is CARB certified. The fuel consumption and engine size of the CAT INV2000 is not so different from the Ford’s but the power output is completely different.

The running wattage of the CAT INV2000 generator is lower, at 1800w. Nevertheless it has a 2250w higher peak wattage. This difference might be significant because 200w- less running watts   affects a generator of such a small size. Happily, the CAT INV2000 is a good inverter generator that also offers parallel connectivity. This means it can double your power output and enable you to do many things.

Overall, the Cat INV2000 is a good inverter generator that beats the Ford FG2200is on matters to do with fuel consumption. This is so, but only by a tiny margin. Both generators have a 6-hour specified runtime from a gas tank that is 50% of the rated load.

It is true that the CAT INV2000 generator has not been around for long. For this reason, we have to go with the brand history to judge its durability. For a fact, this brand of generators does have an impressive record and a reputation for building tough machines. The INV2000 generator may not be meant for the rugged industrial environment.

Regardless, we can trust that the CAT INV2000 model is a good inverter generator that has remained faithful to its reputation of building durable, high standard equipment. These kinds of comprehensive portable generator reviews certainly help users to make a good choice. Truly, a good name unfailingly lasts forever.

My name is Alexey P. I was born in Poland but later moved to the USA in 1998. As a well-qualified and fairly experienced electrician, I love working with DIY projects. As a result of my professional training in the field of electrical engineering, I am well versed with the key elements of the trade. I am generally knowledgeable with all inspecting codes and important regulations governing electrical components and repair. I presently live in Dover, Delaware, USA. Want to know a little about my life outside work? It is no wonder. If you encounter any challenges with your portable generator while on that camping expedition, you can count on me to help deal with that decisively. I love life. I love people. And yes, I love generators, of course!

Gentent Canopy Cover: A Most Efficient, Portable Generator Cover For All Weather Conditions

How Much Power Can the 7500 watt CAT RP7500E Generator Give You? Find Out the Exciting Possibilities of This Famous Beast

We will be happy to hear your thoughts

How to Easily Wire a Transfer Switch to Your Home

How to Charge Your Electric Vehicle Using a Portable Generator

How to Run a Portable Generator Safely Whether in Rain, Snow or Wet Weather

How to Change Oil in the Portable Generator